GI Jews: Jewish Americans in World War II tells the story of the 550,000 Jewish American men and women who fought in World War II. In their own words, veterans both famous (director Mel Brooks, former Secretary of State Henry Kissinger) and unknown share their war experiences: how they fought for their nation and people, struggled with anti-Semitism within their ranks, and emerged transformed. 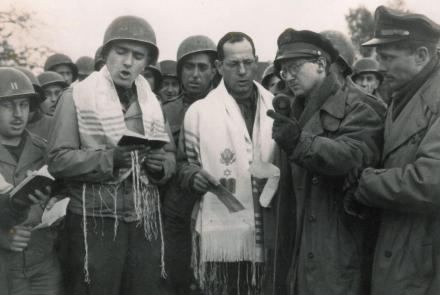 The first German city to fall to American forces was Aachen. There, a service was held by Jewish GIs that was broadcast in Germany and around the world by the National Broadcasting Company. Max Fuchs, an infantryman, volunteered to sing as the cantor, and he recalls his experience that day as they gathered to remember the fallen.