Honoring the dead is something cultures have practiced for millennia, and in Mexico, their Día de los Muertos celebration has become one of the most recognizable examples from around the world. Gathering together to celebrate the lives of those that have passed on, they create richly decorated altars that offer their favorite foods, drinks, flowers, art, photos and more to the departed.

In music, composers have turned to the Requiem, a musical setting of the Latin Mass for the Dead, which is typically in a different character compared to the celebrations of life on the Mexican holiday.

You have a rare opportunity this Friday evening at the Kennedy Center to musically experience both in the world premiere of Cantos de Requiem, a rare requiem penned by a Mexican composer, performed by New Orchestra of Washington (NOW) and Choral Arts on a program dedicated to music by Mexican composers. The composer, Jorge Vidales, and the conductor of NOW, Alejandro Hernandez-Valdez, answered some questions I had and let us know how we can prepare for the experience.

JB: What does it mean to you to have a concert of music by Mexican composers, with a Mexican conductor, celebrating a Mexican holiday in Washington, nearly 2,000 miles away from Mexico?

AHV: My identity as a person and as a musician is shaped by the fact that I have spent half of my life in Mexico and half of my life in the United States. I love both countries dearly and I am eternally grateful that I am part of these two rich neighboring cultures. In a way I feel that Mexico is my birth mother and the United States my adoptive mother. Since these two countries and their complex relationship represent the essence of who I have become, I feel it is my responsibility to create projects that promote unity and mutual appreciation between Mexico and the United States.

JV: I consider it a testament to the power and richness of Mexican art, which has a centuries-long history of tradition and innovation that stems from a clash of cultures that gave birth to a new national and cultural identity.

JB: I heard this is the first requiem by a Mexican composer, was there a particular moment or reason you were inspired to collaborate and write a requiem?

AHV: I can’t say with 100 percent certainty that this is the first requiem by a Mexican composer (there is, for example, a requiem from 1882 by a Mexican composer called Cenobio Paniagua y Vasques), but it is certainly not a type of composition that has been extensively used by Mexican composers. Our goal, through the annual commissioning of Requiems for Día de los muertos, is to give contemporary Mexican composers an opportunity to use the inspiration and pathos a Requiem setting is able to offer to create something new and transcendental.

JV: The obvious reason was the COVID-19 pandemic and its terrible effects worldwide and, especially, in my hometown of Mexico City, which was hit with cruel severity by the disease and its consequences.

JB: What was your approach when writing the requiem? Does it follow any traditional aspects of a requiem? How does it differ?

JV: The proposed duration of the piece did not allow for a full Requiem Mass proper (meaning a setting of the whole text). So, very early I decided that the piece would not be a complete Requiem, but rather a more personal reflection around the subjects of death and mourning, themes that were having such poignancy and urgency in my hometown, like I explained. With this in mind, I decided to meld the traditional religious aspect of the Latin text of the Requiem Mass with a more subjective and personal reflection around the themes of death and grief. This being a vocal work, the key lay, of course, in the texts. Songs of Requiem follows traditional aspects of a Requiem in the sense that it is a work for soloists, choir and orchestra that uses the Latin text of the Requiem Mass (omitting some sections and abbreviating others). It differs from this tradition in the sense that it incorporates secular poems, from the great tradition of Mexican lyric poetry, that give voice to the human aspects of pain, grief and sorrow that surround death. The piece fuses both the spiritual and the earthly realms in their expression and reactions towards death.

JB: What were the challenges in putting this together? What surprised you?

AHV: A challenge with a project like this, as with any commission, is to come to a unified vision for the composition. As the commissioning organization, we set the parameters and then we encourage the composer to use these parameters as a point of departure for their inspiration. In the end however, the real success of the project can only be determined by the reaction of those who hear it. So, for that reason, I would say that the biggest challenge is to get enough people to come to the concert to experience the result of a project that has taken months to bring to fruition. A World Premiere is always a risk in that people don’t know what to expect, but it is also one of the most thrilling and unique experiences in the performing arts world. It is a true privilege to be able to listen to a piece of music that nobody has ever heard before.

JV: The first challenge was constructing a text that met these requirements. My primary source was, of course, the liturgical Latin text of the Requiem Mass. The other sources I had to find, so I began a months-long process of reading Mexican poetry and looking for poems of an elegiac nature or that reflected striking emotions around the themes of death and mourning. These poems had to meet several requirements besides expressing these themes, however; they also needed to work alongside the Latin texts and create a meaningful and cohesive overarching narrative with them.

Maybe what surprises me is that, after going through more than a dozen versions, the final text seems to work as well as it does.

JB: Are there any particular moments in the requiem listeners should keep an ear out for? 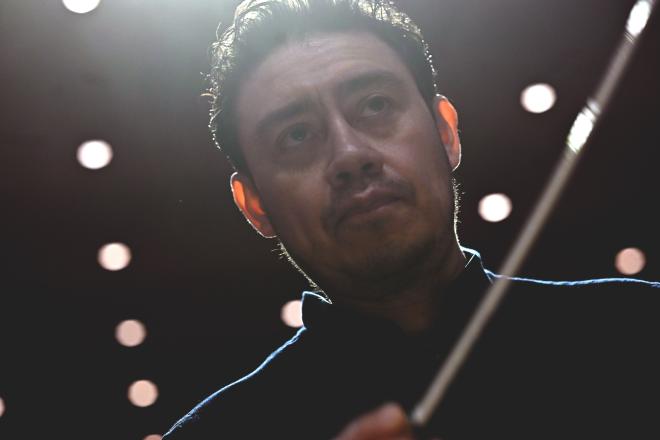 AHV: There are many beautiful moments in the piece—Jorge Vidales has a wonderful compositional technique and writes beautifully for the instruments and for the voice. My favorite moment of the piece is however, towards the end, which is truly cathartic. In the last movement he brings back the opening material, with the choir singing in Latin as they did at the top of the piece, and on top of it he superimposes melodic arabesques, in Spanish, that are sang by the soloists. By doing this he is bringing the celestial and the earthy, the ancestral and the present to a beautiful amalgamation that is highly satisfying.

JV: A piece of music involves the creation of a new order of time, so all moments are important. However, I would ask listeners to keep an ear out for the dialogue between the spiritual world (sung in Latin by the choir) and the human world (sung in Spanish by the soloists) and how they come together at the final section of the work, as we get nearer to the final mystery. It would be most useful to read the English translation of the text, before listening to the piece, in order to fully appreciate this dialogue.

JB: How did you come to choose the other works on the program?

AHV: When I was designing the program I felt that we needed to counterbalance the somber qualities of the Requiem, which will take place on the first half of the program, with works that are more celebratory on the second half. After all, for us Mexicans, Día de los muertos is not only a time to remember, but also a time to celebrate those who have passed on.

JB: For listeners not familiar with Día de los Muertos, is there anything you would want them to know before hearing the concert?

AHV: Día de los muertos is one of the most venerable and ancient traditions of Mexico. It incorporates pre-Hispanic and Christian-European traditions to reflect the essence of Mexico, which is a country that was born of the clash of two vastly different civilizations, and has become one of the richest and most appreciated cultures around the world.

JV: The essence of Día de Muertos in Mexico is to make preparations to allow the souls of your loved ones, who have died, to transition from the spiritual realm into our world, so they can visit you and listen to your prayers and to the messages you want to give them. This is accomplished through your fond remembrance of them and through the love that reaches beyond the material world and into the spiritual realm. The dead keep living through us.

I would like to add that the date of the premiere for my work, Songs of Requiem, coincides with the one-year anniversary of the death of Mario Lavista, a great Mexican composer, who was also one of my teachers.